The Consumer Electronics Show (CES) is the world’s largest technology show, each year taking over the Las Vegas Convention Center and surrounding hotels for four full days of innovation. With companies unveiling their latest and greatest, industry attendees get a first look at new tech products before they are made widely available to consumers. 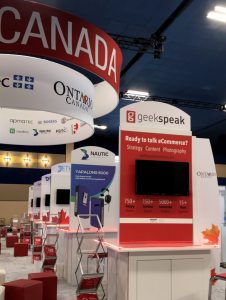 According to the Consumer Technology Association, CES is “the world’s gathering place for all those who thrive on the business of consumer technologies.” Thanks to a Canada Trade Mission led by the Government of Canada, Global Affairs Canada and the Canadian Trade Commissioner Service, geekspeak and 20 other Canadian companies were able to exhibit full-time in this massive event, stationed within the Canadian Pavilion in the Westgate Hotel.

Three geekspeak team members attended the event, showcasing eCommerce strategies and services, as well as new technology that can be leveraged to assist in the creation of optimized product content.

Here are some of the biggest themes we saw throughout the show floors of CES: 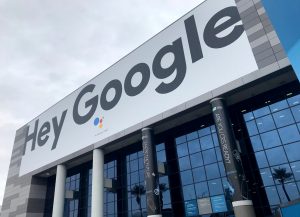 While the concept of AI itself is not new, the ways in which it is being used are becoming more innovative and immersive than ever before. Almost any product you can imagine – from your oven to your travel luggage – is becoming “smart” with AI technology. When it comes to digital assistants, CES saw a race between Amazon Alexa and Google Home for integration into everyday gadgets like smartphones and speakers.

No matter what venue or conference room you entered at CES 2019, there seemed to be a different robot at every turn. From child-friendly robots that help teach students on the autism spectrum, to promotional bots that can be coded to deliver information as museum guides or airport wayfinding, robots were definitely a hit at this year’s event. 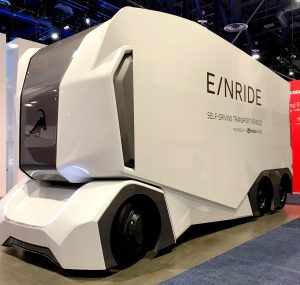 Almost every major car manufacturer was present at CES, showcasing vehicles that were either fully autonomous, or that boasted new smart features to assist drivers. Some cars were still in prototypical stages, while others – like Baidu’s, for example – are ready for mass production. It wasn’t only self-driving cars on site either – autonomous transport trucks and even motorcycles were showcased. BMW’s self-driving motorcycle stole the show when it completed a circuit full of ramps, obstacles and sharp turns.

With Smart Homes emerging as one of the largest themes of CES 2019, many of the event’s venues were reminiscent of The Jetsons; the animated show that first debuted in the 60s, featuring a family set in the year 2062. Laundry machines, faucets, blenders, microwaves, and even toilets were given tech-powered upgrades at CES, adding these products to the now-typical doorbells, lights and thermostats of existing smart homes.

Much like robots, 8K TVs seemed to be around every corner at CES 2019. While numerous television manufacturers released their own versions of the 8K screen over the course of the conference, LG and Samsung came out on top with some of the most exciting TV announcements. LG showcased an 88-inch OLED 8K TV called the Z9, as well as one of the most talked-about features of CES: the LG Signature OLED TV R, a rollable TV that disappears into its stand when not in use. Towards the end of CES, Samsung unveiled its truly massive 219-inch TV, dubbed “The Wall.”

One of the more elusive technologies at CES was new 5G networking, something that seems to be on the radar of every major telecommunications company, though few have actually built products or services around it as of yet. CES 2020 will surely feature more 5G-ready electronics; this year, the concept seemed to be more of a buzzword than anything tangible.

Besides these impressive tech trends witnessed at this year’s CES event, geekspeak was fortunate to have seen a great showing of fellow Canadian companies passionate about technology and innovation, and to have had exciting conversations with industry leaders interested in improving their businesses, communities and selves through technology.